A BRIEF HISTORY OF THE WARMINSTER ATHENÆUM SITE 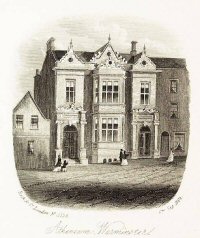 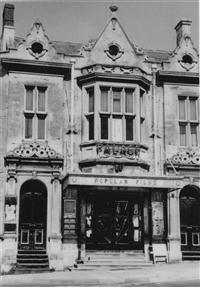 Kyngeston Manor?
The area of Warminster where the Athenæum now stands was not developed until the Middle Ages, by which time it was on the eastern fringes of the town. There has been speculation for many centuries that the medieval Kyngeston Manor stood on this site, formerly known as Corn Hylle, and that its foundations form part of the current building. The Manor house was owned by Sir John de Kyngeston, guardian to John Mauduit, holder of the Manor of Warminster in 1329.

Could this site have once been the medieval Kyngeston Manor?

We have yet to find any physical evidence to support this idea other than records and photographs of a group of medieval heraldic stones uncovered here in 1810 and later built into a wall of the new Athenæum in 1857. These stones – dating from the 1300s – remained part of the fabric of the Athenæum for a further seventy-seven years until they were removed to The Avenue School in the 1930s and have since been ‘lost’.

The Search Hoop Inn
The earliest known record for the site is from 1644 during the English Civil War when a visitor to the Inn was accused of being a Roundhead spy. At this time the Inn was a popular coaching stop servicing those traveling cross-country to London, as well as local merchants who attended the bustling Saturday corn market and the pig shambles that stood in front of the tavern.

A Search Hoop was used to sieve barley and was the symbol of the first Inn on this site.

In 1810 a large fire broke out and destroyed part of the thatch, timber and stone inn, which included outhouses, stables and a malthouse. The following year, the tavern was rebuilt by Samuel Provis and renamed The London and Commercial Inn. This post house became a noted coaching point for the town and was briefly home of the Inspector in charge of the newly established County Police 1840-42. It was also a popular location for the auctioning of property, goods and produce.

The cellars of the C17th tavern are the only part known to have survived to this day.

London & Commercial Inn
On Market Day The London Inn would dine four to five dozen farmers. Up to five hundred wagons of corn could arrive on Market Day extending the full length of the town – with tens of thousands of sacks of corn – often grid-locking the roads into town from all directions on a Friday night.

The London Inn received six stagecoaches per week – three arriving and three departing. The main route served by Warminster was the Exeter Road between London and Barnstaple, The other route was Portsmouth to Bristol.

The Inns flourished and the town prospered until the arrival of the railways in 1851 took the passing trade. Within a couple of years, the London Inn was bankrupt.

Warminster Athenæum
In November 1850, a group of local professional men established an ‘Athenæum’ Institution for Warminster; “to afford intellectual enjoyment as a means of cultivating literary taste and with the help of the people of Warminster, improve the partial education of pupils at the British and National Schools, rendering necessary on account of the early age at which children were removed from such schools (ten years of age).”

The members met on the ground floor of The Literary Institution in The Market Place, had a small library and reading room, and held lectures in the Town Hall.

In time the membership outgrew the rented premises and a new home was sought. After several attempts to purchase other properties, the now vacant London Inn was chosen as a suitable venue having closed down after bankruptcy in 1854. A lease was taken out with the owner, the 4th Marquess of Bath, for the purposes of building a new Athenæum Institution for Warminster.

During 1857, The London Inn buildings to the west and north were pulled down and the site cleared ready for redevelopment. The property to the east occupied by a printer Mr Palmer, his family and business was not demolished and survives to this day.

A low glass-roofed lecture hall for 350 guests was the first part to be erected followed by the main building – still in use today – at the front. This contained a reading room, a small library and recreation room on the ground floor, with two classrooms on the first floor – the larger for The Government School of Art. The total cost to build was £1190 – a debt that would last for sixty years.

The new Athenæum flourished as a meeting place and a centre of learning, with lectures from eminent speakers such as author Charles Kingsley (right), novelty acts such as Tom Thumb – ‘man in-miniature’, penny readings choral music and recitals. Also on offer was chess in the recreation room and quoits in the gardens.

In 1879, the Lecture hall was rebuilt in memory of one of the Athenæum’s founders, Dr Charles Bleeck. This larger memorial hall, with its stage and committee rooms, remains for the most part unchanged to this day. It was on this same stage that Oscar Wilde lectured in 1884, General Booth in 1906 and Emmeline Pankhurst in 1911.

As the years progressed, the arrival of affordable books, daily papers, and public libraries, along with a reduction in lectures made the Institution obsolete. By 1895, the building was under-used and in decline so passed to new trustees – the Urban District Council – who reformed the charity and adapted the rooms for more recreational use.
The recreation room (now the Gallery) was extended and a skittle alley (now the toilet block) was added. Lectures were replaced with popular entertainments and music hall acts.

In the hands of the Council, the educational side of the Institution was expanded through an education committee and school classes. In 1897 the Government Education Inspectors insisted the Athenæum must expand if it was to continue to offer classes. An initial plan to add a floor to the building was rejected in favour of a new school adjoining. This was completed in 1901, made possible by the demolition of the neighbouring Ship Inn. The school made use of the first-floor classrooms of the Athenæum as well up to the school’s closure in 1931.

In the Bleeck Hall entertainments continued to be popular, but society was changing – the growing popularity of cinema was overtaking live theatre and lectures.

In 1912, by public vote, the Bleeck Hall was converted into The Electric Picture Palace with alterations made to house the new cinema and projector. The first picture to be shown was a hand-coloured film – Don Juan. Activities on the stage continued on certain days and later a billiards club was added in the old reading room. This survived as a gentlemen’s club until 1990.

Palace Cinema
The Palace cinema served the community and troops through the Great War and the 1920s, coming into its own with the dawn of ‘talkies’ in the 1930s. It showed two films, twice nightly, every night of the week. Around the same time, stage performances by groups such as The Warminster Amateur Operatic Society and future Hollywood star Freddie Bartholemew kept the theatre alive.

The most extensive alterations to the building came in 1935 when the lower front bay was removed and an opening created through the centre of the building to the hall behind. Linking walkways from the balcony to the first floor were also added, along with toilet facilities and dressing rooms.

Mirroring the national trend, The Palace reached its prime in the 1940s – when the town was swelled by international troops – but within ten years was near dilapidated and struggling. Competition from the larger Regal Cinema on Weymouth Street (purpose-built in 1936), and later television, led to the cinema closing in December 1964 – after fifty-two years and over thirteen thousand films being shown. The dormant building was rescued by the local Arts Society with a view to creating a permanent Arts Centre for the town.

Athenæum/West Wilts Arts Centre
After four years of closure for extensive repair, the building reopened as a cultural hub for Warminster on 5th March 1969. Throughout the 1970s and 1980s, Warminster Arts Centre presented highly ambitious programmes of arts: dramatic plays, contemporary dance and ballet, cultural films, classical and folk music, along with eminent actors, musicians, and performers. In 1987 the volunteer organisation that operated the Centre formed a limited company – West Wilts Arts – seeking to expand its remit to the district at large and broaden its cultural appeal.

In 1993, extensive grant-funded refurbishment work was undertaken costing around £100,000. The majority of the building was redecorated, the foyer upgraded, the lounge turned into an enclosed gallery, the redundant caretaker’s house was incorporated into the main building, with offices created for the staff. The following year a fund-raising drive replaced all the seats.

By the mid-1990s, a new director was employed to raise further the profile of the venue and meet the needs of the Arts funding bodies – at times offering a programme that was sadly too ambitious and costly for a provincial market town. Over thirty celebrity performers entertained from the venue in 1995 alone – including Sir John Mills, Wendy Craig, Timothy West, and George Melly.

An expanding workforce, to meet the demands of a professional venue, over-stretched the company finances and resulted in liquidation in February 1997.

In the autumn of 1998, the District Council sought to relinquish its trusteeship of the building. A steering group of local supporters was formed and negotiations began to secure ownership and a new life for the Arts Centre and theatre.

Athenæum Centre for the Community
In the autumn of 2000, six members of the steering group were appointed trustees with, for the first time, all parts of the building coming under the control of the single ‘Warminster Athenæum Trust’. The building was renamed the Athenæum Centre for the Community and re-opened for business. In the subsequent years, the trustees have worked to expand the use of the building to secure its long term future hosting: classes, lectures, resident drama companies, cinema, and meetings.

Good progress was made to upgrade and restore the neglected areas of the building. Major works were undertaken to improve the heating, water supply, facilities, decoration and restore the roof surfaces.

In 2005 the trustees drew up plans to develop a large void between the main building and the hall to improve accessibility. The project, along with a community kitchen, accessible toilet, and lift was completed in Spring 2011 – the most extensive alteration to the building since the 1940s.

The Sheila Toomey Award was founded in 2002 – in memory of one of the new trustees – with a remit to support young people pursuing a career in the Arts.

Most recently major improvements have been made to the entrance steps, the toilet facilities, and stage rigging. The next phase of restoration is the asset transfer of the adjoining Youth Centre. This ambitious scheme will reunite the two parts of the building – separated since the 1940s – and allow the Centre to grow.

From medieval tavern to coaching inn; library, lecture hall, and school to cinema; arts centre and theatre to Centre for the community. This place has never stood still – ever-evolving – but always remaining a cherished heart of Warminster.