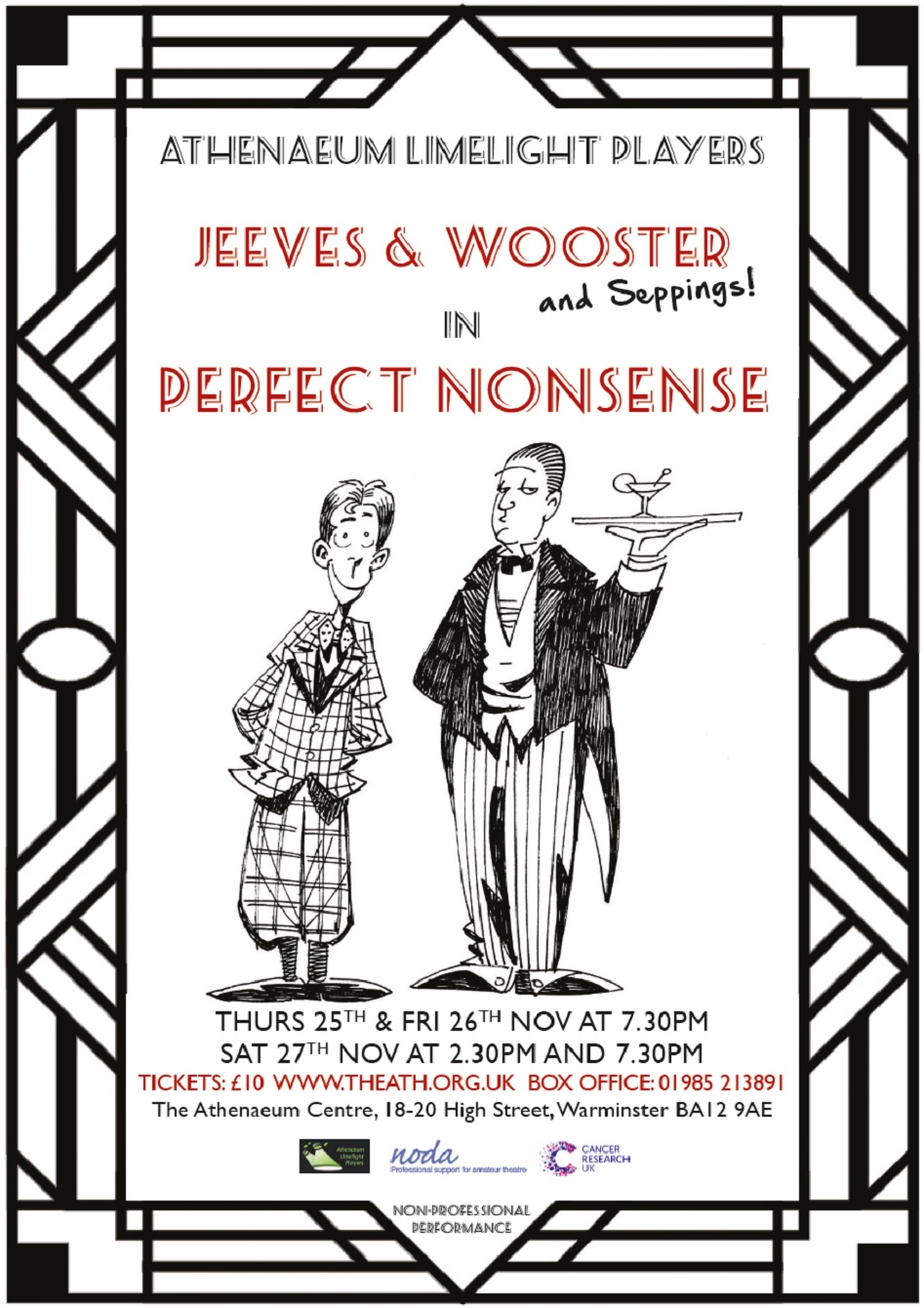 A play from the works of P. G. Wodehouse
Adapted by The Goodale Brothers
Directed by Penelope J. H. Christopher

********* CAUTION too much laughter *******
You will be side-splitting so much at Jeeves & Wooster (not forgetting Seppings!) that for your safety, we have decided that many of our audience would prefer to laugh out loud if masks are worn – so we ask that our patrons do so if possible; additionally to prevent being shaken in your seats by belly-laughing strangers, each booking will be socially distanced by one seat on either side.
Our publicity photographer said she had to stop snapping during a rehearsal she was laughing so much whilst watching the antics of this cast.
Augustus (Gussie) Fink-Nottle, a short sighted, shy, sensitive, nerdy young man, is an old school chum of Bertie Wooster. He has devoted his life to the study of newts, specialising in how the full moon influences the love life of the newt. His on-off engagement to Madeleine Bassett is of continuing concern to Bertie as she has indicated that Bertie is next in line should it not work out with Gussie. Will it be Bertie or will it be Gussie who walks down the aisle with Madeleine? All will be revealed in ‘Jeeves & Wooster in Perfect Nonsense’ at the Athenaeum 25th – 27th November. Get your tickets now.    Only £10!

Jamie House has been a regular on the Atheneum stage for eight years now after taking to the boards for the first time as Manuel in Fawlty Towers in 2013. Since then, he has appeared in many different shows from Shakespeare to pantomime, from musicals to TV comedies. His most recent roles include Frederick Fleet in Titanic the Musical at the Memorial Theatre in Frome, Pike in Dad’s Army in 2018 and Prince Ludwig in Blackadder II in 2019.

Being a huge fan of classic British comedy, he is thrilled to have been asked to take on the role of Jeeves (and others) in Jeeves and Wooster!

Mark Whitwood moved to Westbury from Cornwall nearly six years ago and has continued to enjoy his participation in theatrical productions, something that has been in his blood continuously from his schooldays. Since living locally, he has performed with Apollo productions and was thrilled to be a part of Oddity Theatre’s production of Sister Act, playing Monsignor O’Hara. He has been fortunate in playing some comedy parts with ALPs alongside the more sombre role of Tom Oakley in Goodnight, Mister Tom. Mark was excited finally to return to the stage after lockdown, playing Mr Bumble in Masqueraders’ production of Oliver! and now participating in this mad cap retelling of Bertie Wooster’s capers, assisted by Jeeves and Seppings.

This is Andrew Chapman’s sixth show with ALPs. After playing one of his major comedic inspirations in Blackadder II two years ago, now he is now back for another, Bertram Wilberforce Wooster. He also played Bernard in Yes, Prime Minister and Captain Lombard in And Then There Were None. The past couple of years may have been tricky, but Jeeves will sort it out, he is good at that sort of thing.