The Sheila Toomey Award is granted annually to assist financially those students with exceptional talent who wish to pursue a career in the fields of Art, Dance, or Drama. Students of Music can secure an award from our sister charity – The Brickhill Music Fund – administered by The Sheila Toomey Award.

Criteria for applications
Applicants must be aged between 16-21
They must live within the area designated by the Warminster Town Council and outer village parishes.
Apply to follow your dream!
Applications in writing and addressed to:
( send applications between )
( 1st January and 1st March each year )

Judging applications
An independent panel made up of the Trustees judges all applications on talent and merit. Special consideration is given to those who have demonstrated their enthusiasm, i.e. by involving themselves with the Warminster Athenaeum Centre or its associated arts organisations.

Little Sparrows Theatre Company was formed in 2003. It is the theatrical arm of the Sheila Toomey Award, which puts on musical shows to raise funds for the Award.

Our company gives young people the opportunity to share their talent and enthusiasm – and to help a worthwhile cause within our community.

2012 –  OLIVER! – The Musical
Both exclusively produced by Little Sparrows for the Sheila Toomey Award fund.

2013 – PETER PAN – The Musical
Most profits (£6,000) went to the Athenaeum for the restoration of the Auditorium, Stage, and Technical Department. The exit collection and raffle proceeds went to the Sheila Award.

2015 – SMIKE – The Musical
Produced on March 16th, The musical, based on Charles Dicken’s Nicholas Nickleby.

2016  – SHEILA’S STARS
A Gala in aid of the Sheila Toomey Award was held on April 9th, starring many of the Award recipients since its inception. 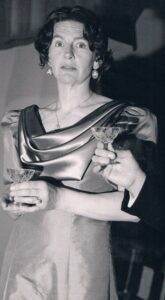 Sheila Toomey was a quite remarkable lady – although not from Warminster, she took the town to her heart and there are few organisations here that did not escape her inspirational touch. She came to Warminster with her husband, and large family, in the early 1980s and became involved with the Town and the Athenæum almost immediately – one of her first projects was the Community Play based upon the lives of the people of Imber.

Sheila’s input in the many organisations of the town can not be under-estimated; – She was a Founder Trustee of the Warminster Athenaeum Trust, and a member of the Civic Trust and Preservation Trust; she served on the Warminster & District Chamber of Trade & Commerce where she was President at the time of her last illness. She was also a founder member of a retailers group, fostering joint working relations and buying. From 1995, she was involved with the Warminster tent at the West Wilts Show, and Chairperson for the Warminster Tourist Information Centre.

With Sheila’s inspiration and driving force The Christmas Lights Committee was re-enthused and the deteriorated lighting scheme completely replaced with a wonderful new display. She was deeply involved in the community of St George’s Church and St George’s School, where she taught voluntarily and served as a Governor for many years. She was an active member of Churches Together from 1980, and coordinator of the Warminster Festival and Biannual Street Fayre. She organised the Warminster contribution of the Wylye Valley Art Trail, and the Warminster Townscape Millennium Project. In recognition of her contribution to Warminster life, Sheila was awarded Warminster Citizen of the Year in 1998.

SHEILA was ABOVE ALL a wife, mother, daughter, granny and good friend. She devoted her life to the town for 20 years, working tirelessly and Warminster will never forget her passion for her loves; the Arts, Theatre, and promoting both of these for the young, in whom she had the greatest faith.