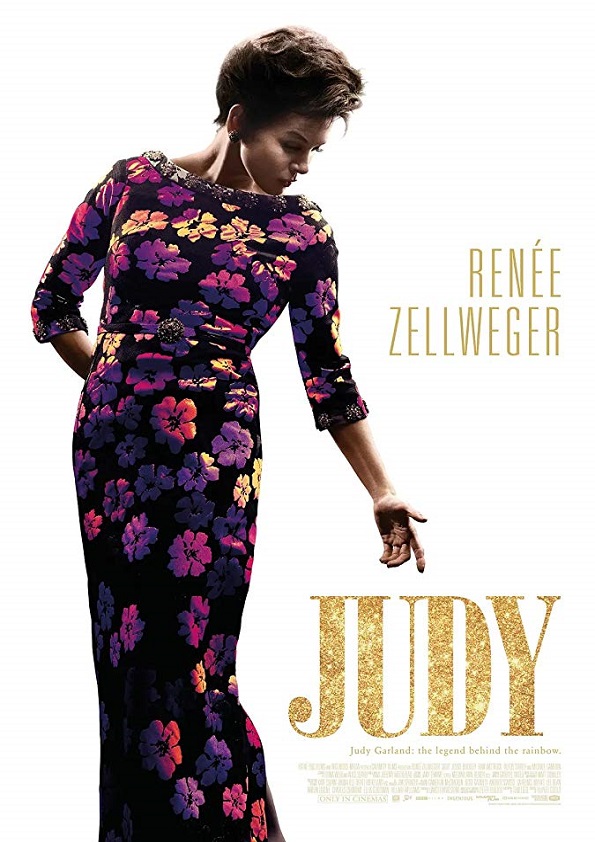 The Oscar nominated film set thirty years after ‘The Wizard of Oz’. Legendary performer Judy Garland (Renée Zellweger) arrives in swinging London in 1968 to perform to sell-out shows at the Talk of the Town nightclub. While here, she reminisces with friends and fans and begins a whirlwind romance with musician Mickey Deans, her soon-to-be fifth husband – all the while her health starts to fail leaving Judy with a painful decision.

Our evening will be made extra special by a live performance from ‘Sticky Toffee Jazz’ before the film. 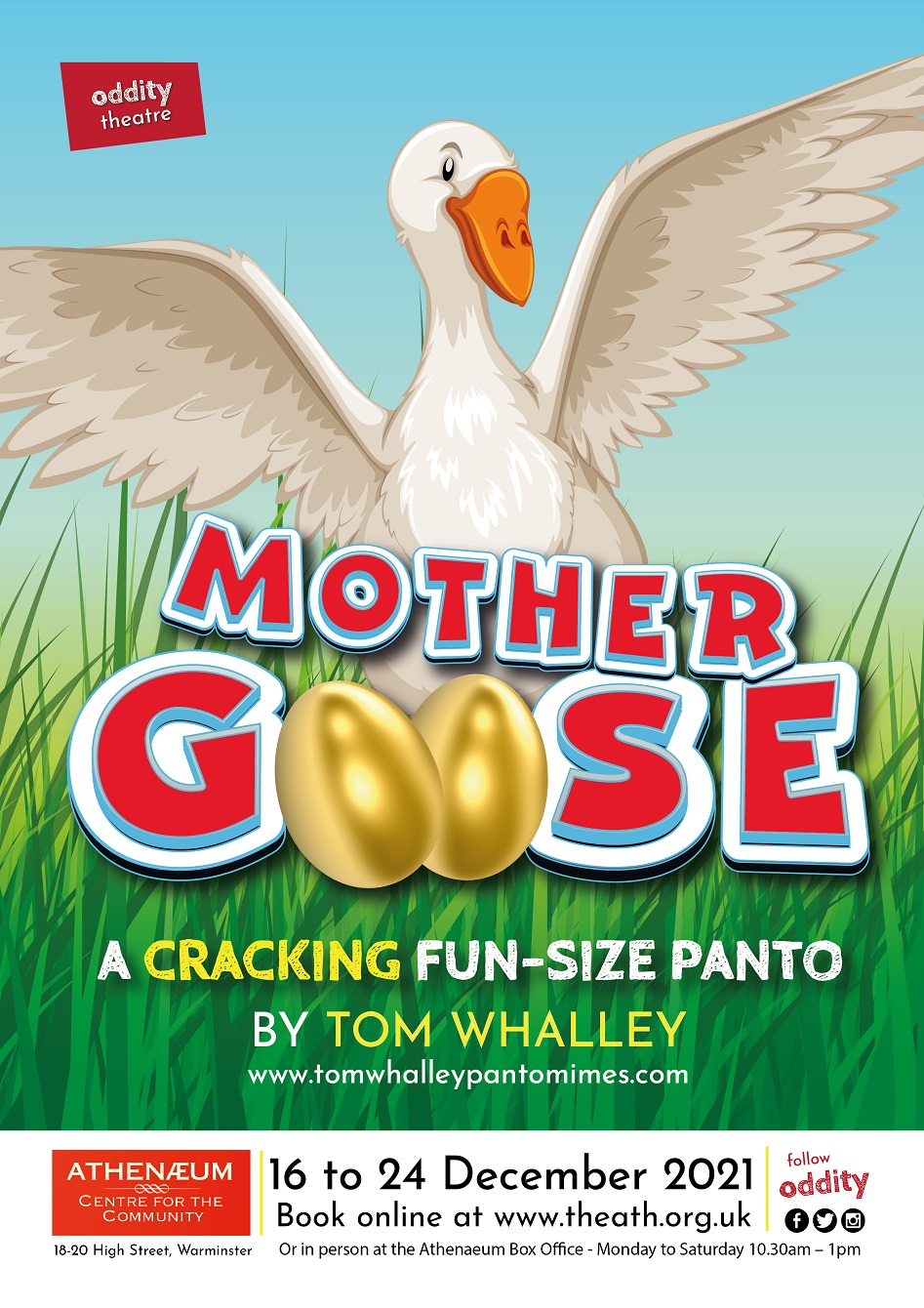 About the show:
The evil demon ‘Foie Gras’ desires nothing more than to bring mankind to its knees. All he needs to succeed is to turn a pure human soul to a life of greed and sin. Meanwhile in the town of Billville, Mother Goose and her son Silly Billy are down on their luck. Practically penniless with only Pricilla the Goose to their name until one day, a golden spell makes them EGG-straordinarilly rich! But Mother Goose is as kind as any human could be, she’d never turn to greed and vanity… would she?

Be first in the queue for the best seats, and hurry, because if you book before 11.59pm on the 31st October you’ll get £2 off each ticket!

More info:
This panto may feel a little different to previous years with the new measures we’ve put in place to keep our audiences, creative team, and performers safe. However, we are confident that the panto spirit, the spectacle, and side-splitting comedy that you have come to expect from an Oddity Panto will feel just as magical as ever. It is a full-length production but has been carefully trimmed to no more than 90-minutes with all the best bits included! A shorter interval to reduce social interaction and a smaller cast than usual, which has meant we could double cast each part to help reduce any risk. (A red cast and a blue cast.)

Please also be aware that Pyrotechnics, Strobe, UV, and Smoke effects may be used in this production. 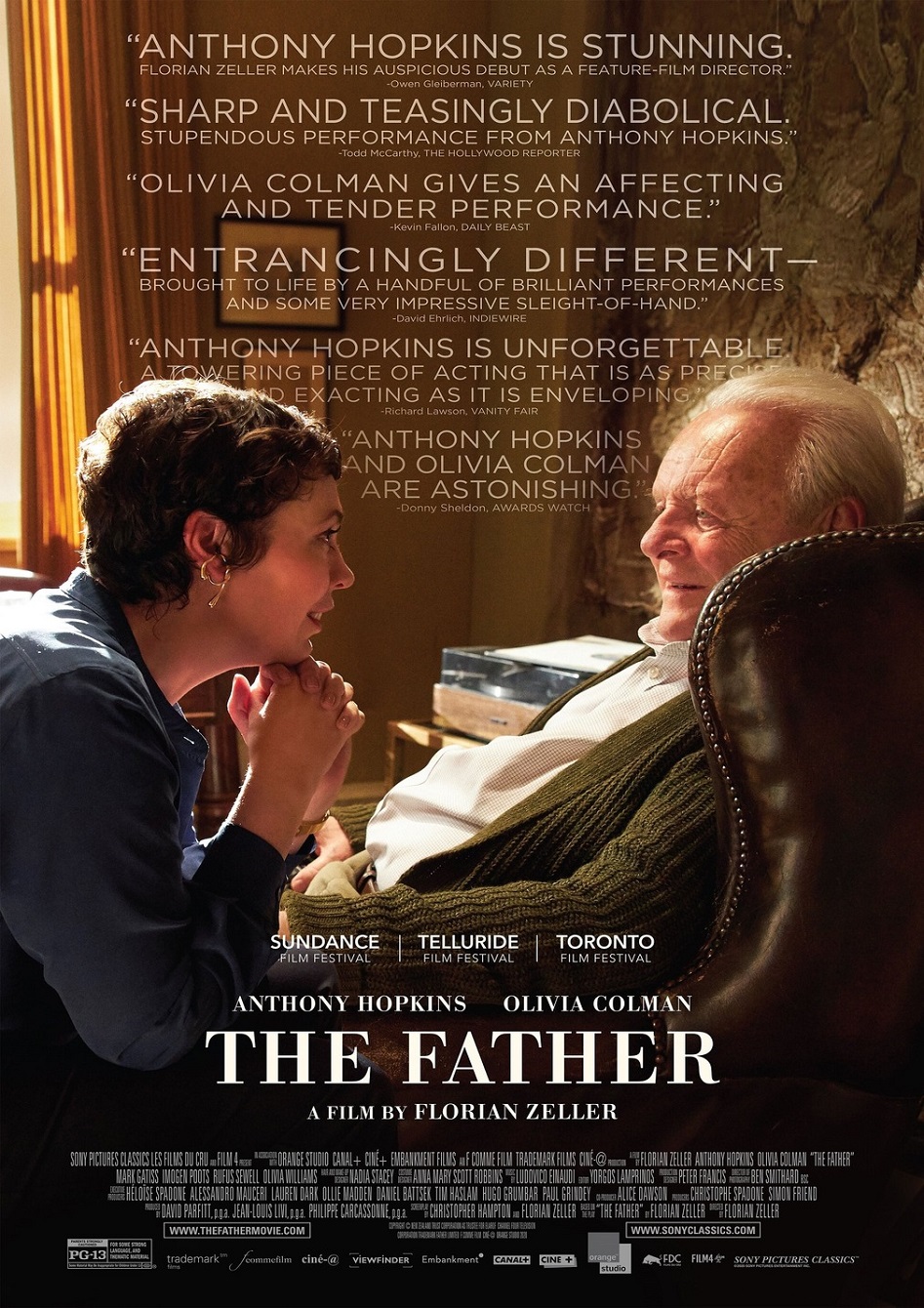 Having scared off his last carer, Anthony, (Anthony Hopkins) an ailing, octogenarian gradually succumbing to dementia, feels abandoned when Anne, (Olivia Coleman) his daughter, tells him she’s moving to Paris. Confused and upset, against the backdrop of a warped perspective and his rapid, heart-rending mental decline, Anthony is starting to lose his grip on reality, struggling to navigate present and past. Now, as faded memories and glimpses of lucidity trigger sudden mood swings, Anthony’s surroundings, and even time itself become distorted. Hopkins deservedly won the best actor award at this year’s Oscars. 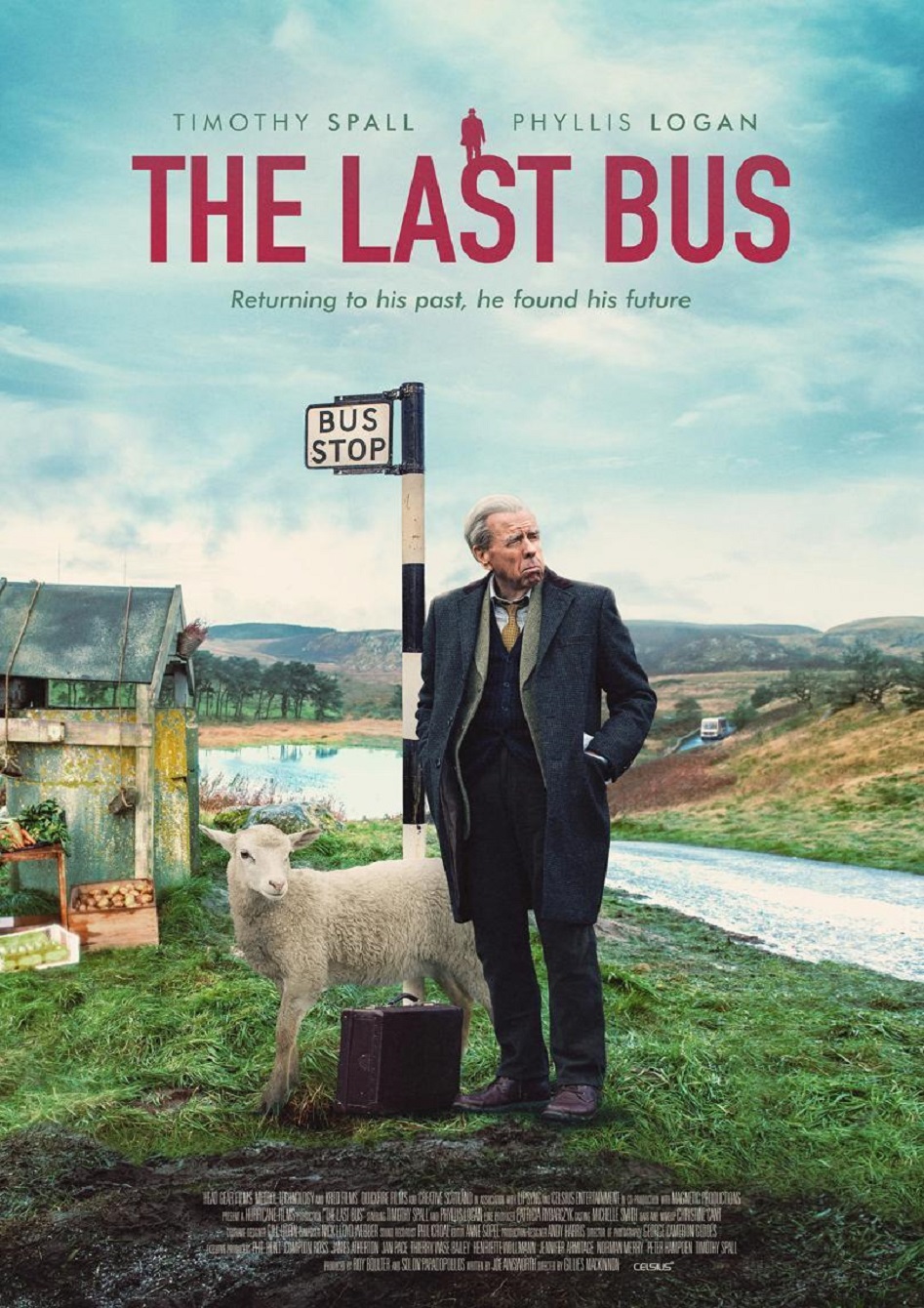 A heart-warming tale about Tom (Timothy Spall), a pensioner whose wife, Mary (Phyllis Logan), has just passed away. He travels all the way from from John O’Groats to Land’s End, using his free bus pass. and carries his wife’s ashes with him in a small suitcase. There he intends to scatter them at the place where they first met. Along the way, his adventures are recorded by the people he meets and helps, and by the end of his trip he has unwittingly become a social media celebrity. 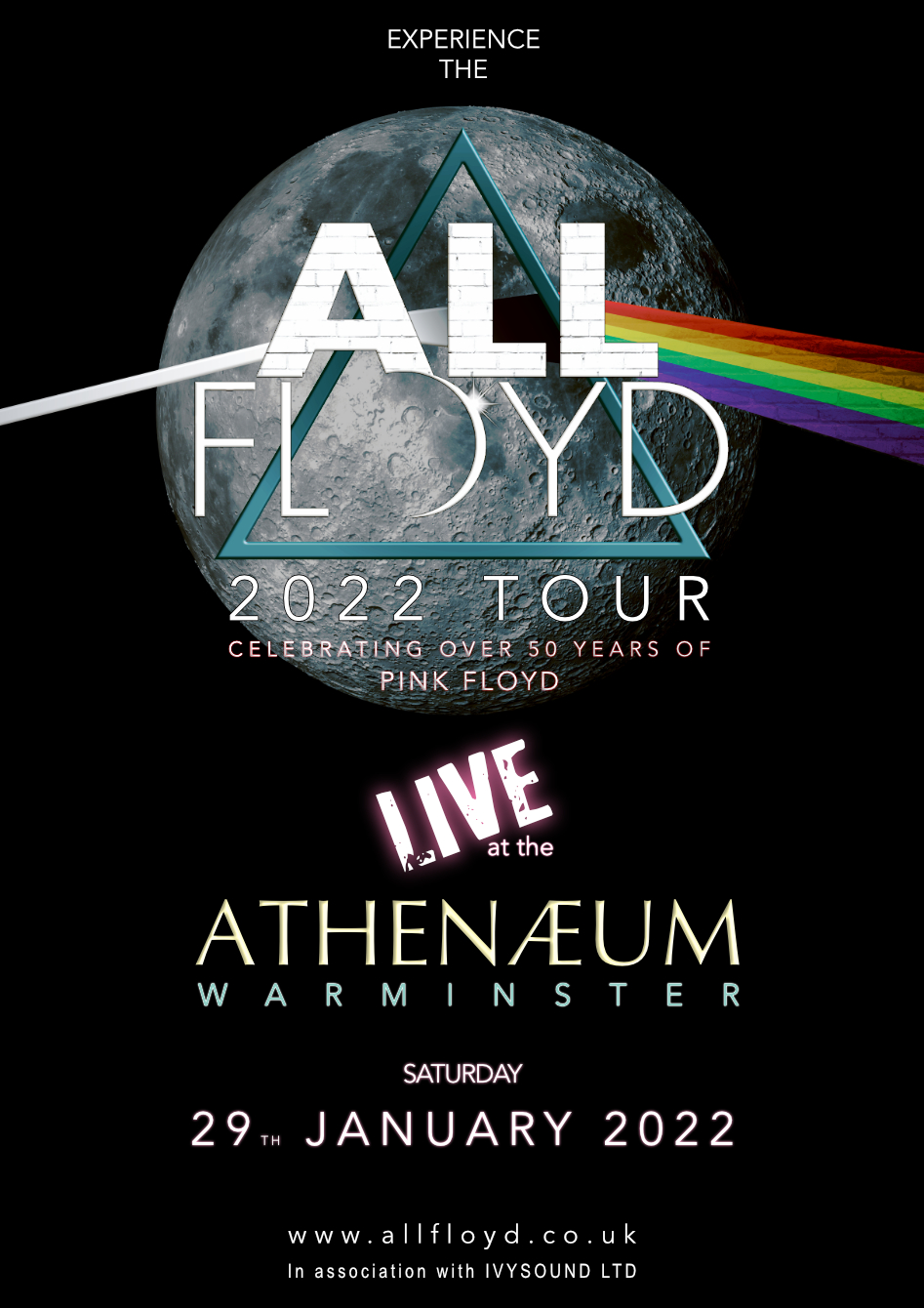 ALL FLOYD’s 2022 tour brings more of the classic Pink Floyd anthology to shows throughout the year, all faithfully recreated in the meticulous detail now expected by All Floyd fans.


Number after number turned out immaculately, note-perfect, complete with backing singers and that wonderful, rich throbbing sound that Floyd fans will be familiar with. Messers Mason, Gilmour, Waters, Wright & Barrett would have been proud to hear their music so faithfully rendered. Close your eyes and they could have been in the room. They weren’t, but they could have been

This is a show not to miss, a spectacular and honest display of Pink Floyd’s rich musical legacy featuring tracks from Meddle and the iconic Dark Side of the Moon through to The Division Bell. 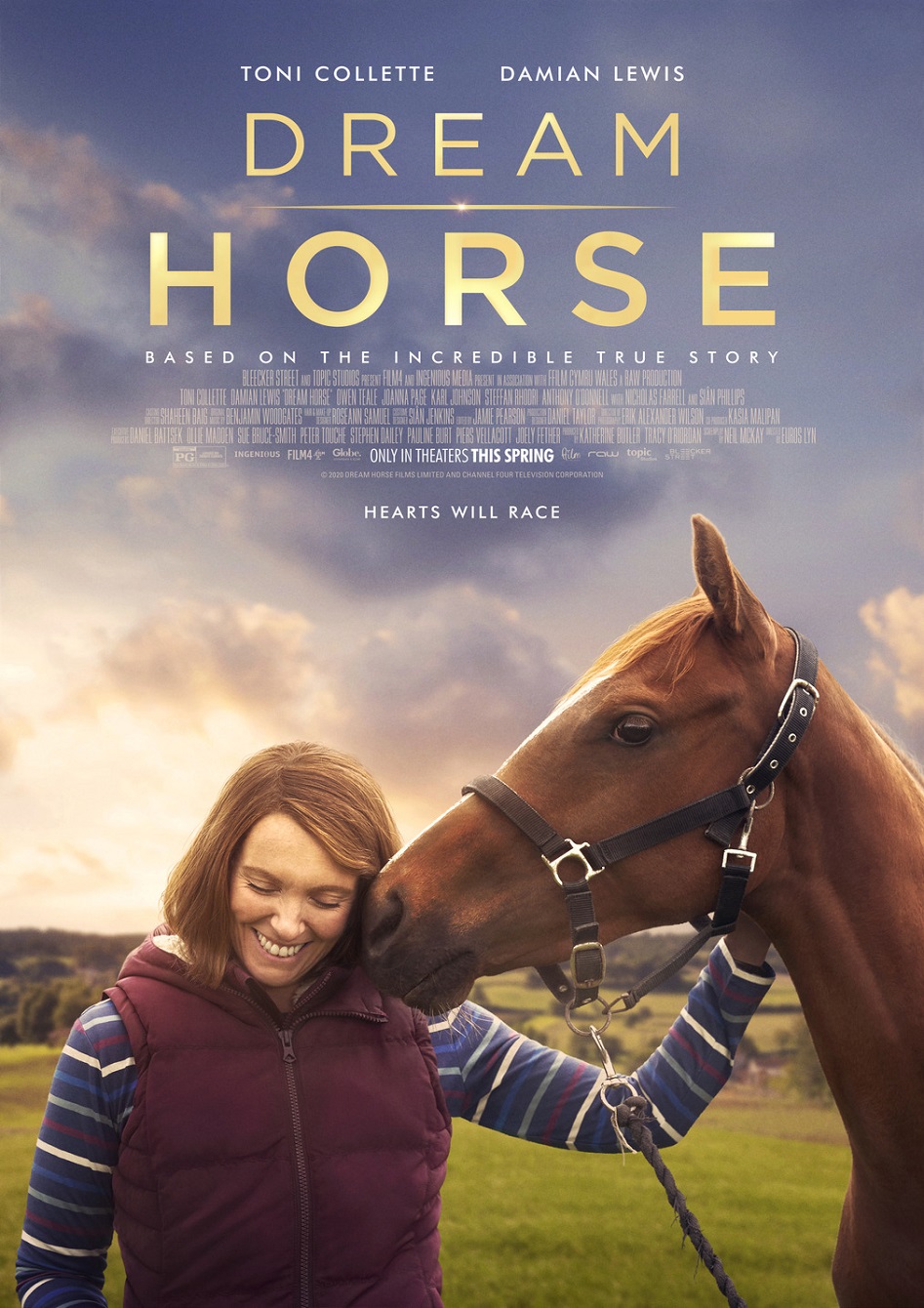 The inspiring true story of Dream Alliance, an unlikely race horse bred by small town Welsh bartender Jan Vokes (Toni Collette). With little money and no experience, Jan convinces her neighbours to chip in their meagre earnings to raise Dream in the hope that he can compete with the racing elite. The group’s investment pays off as Dream rises through the ranks to race in the Welsh Grand National. 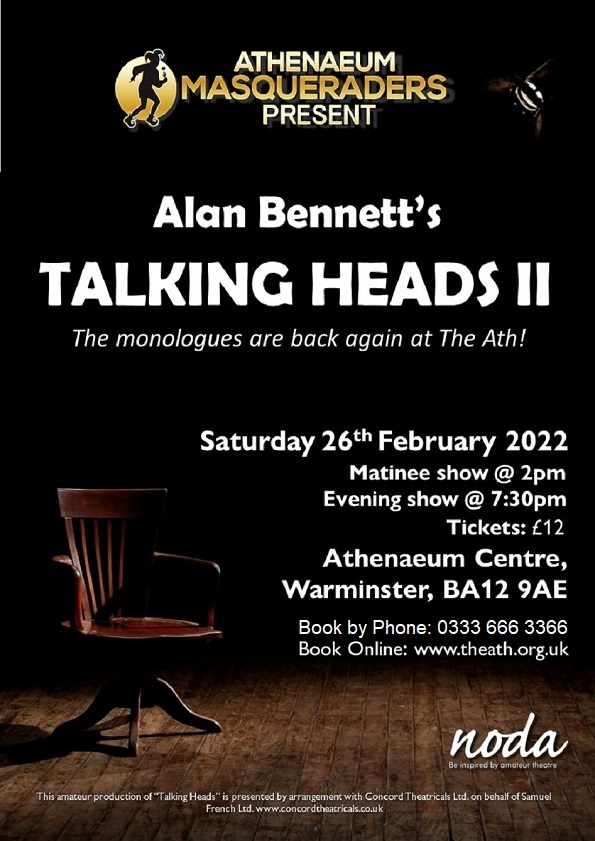 From the 2018 & 2019 NODA SW Best Musical nominated group, who brought shows like Oliver, 9 to 5 The Musical, The Addams Family and The Full Monty and Legally Blonde, The Athenaeum Masqueraders bring to you three of Alan Bennett’s hit dramatic monologues in Talking Heads II in February 2022.

A Cream Cracker Under the Settee: Doris, a widow, lives alone. Refusing to relinquish her independence, she surreptitiously cleans when her home help, Zulema, is absent. When we meet her, she has just fallen over whilst attempting to dust a picture frame high on the wall. The day goes on; unable to get help, Doris reminisces about her quiet, uneventful life with its joys and sadnesses.

Her Big Chance: Meet Lesley, an actress. She has just completed a video (‘targeted chiefly on West Germany’) in which she plays Travis, a career girl who enjoys life, spends a remarkable amount of time topless and shoots a man with a harpoon gun. She tells all, blind to the sinister undertones of her story as well as to her own self-delusions and gullibility.

Soldiering On: Muriel’s husband Ralph has just died, leaving her rather well off – until, that is, her son Giles gets his hands on the money and Muriel comes out the loser.

A Cream Cracker Under the Settee, Her Big Chance & Soldiering On by Alan Bennett
This amateur production of “Talking Heads” is presented by arrangement with Concord Theatricals Ltd. on behalf of Samuel French Ltd. www.concordtheatricals.co.uk

Evening of Mediumship with Nikki Kitt 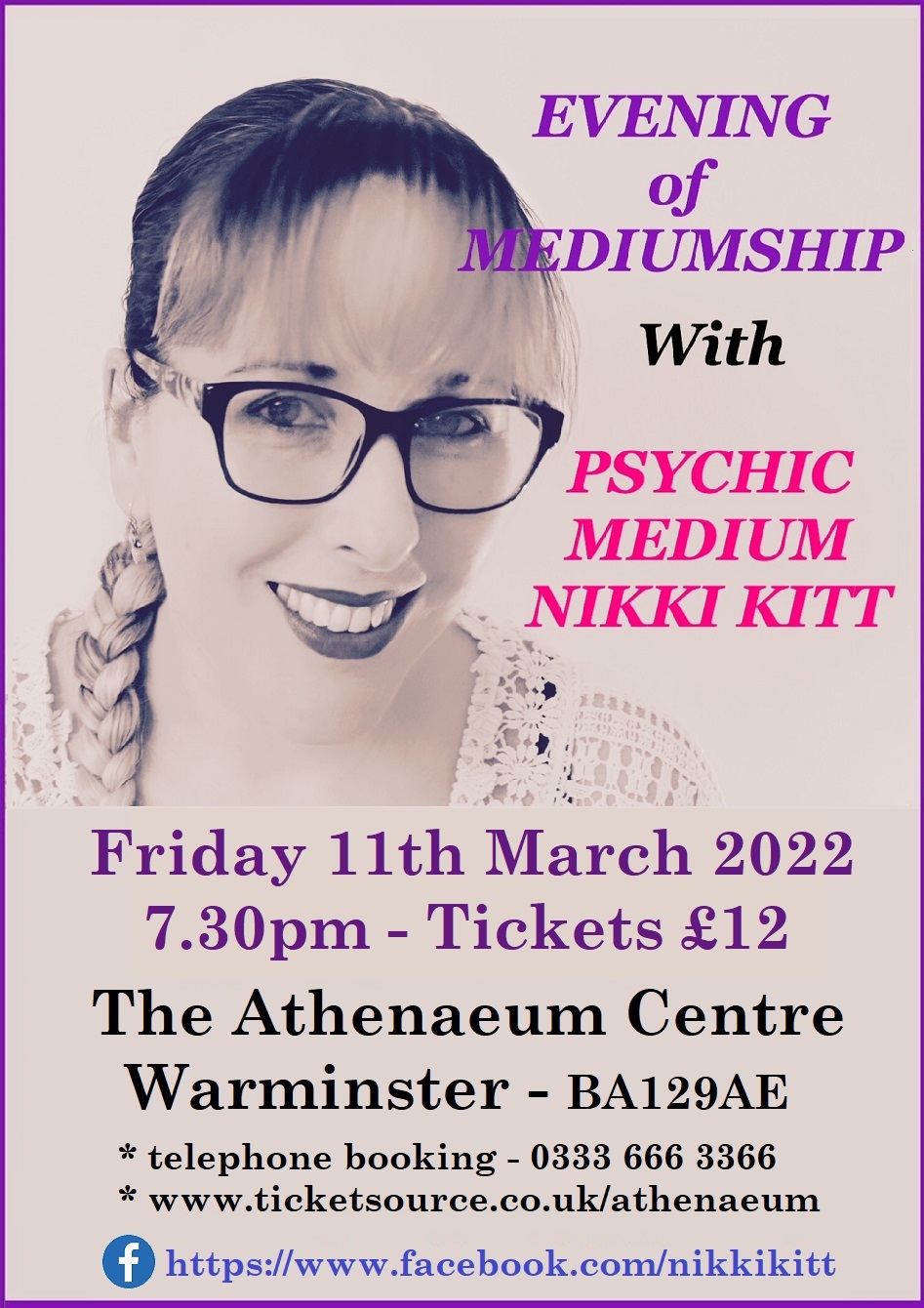 Psychic Medium Nikki Kitt is a Spiritualist Medium who is currently touring the UK with her successful Psychic / Mediumship Evenings.
As a Medium Nikki Kitt aims to provide evidence of life after life by getting links from loved ones in spirit for people in the audience with amazing accuracy in descriptions, personalities and all sorts of personal information.. to give both confirmation and comfort.
I have been aware of spirit my whole life and so have no doubt that we carry on after this physical life and my demonstrations are to prove the same to everyone else.

Testimonies :-
“Hi Nikki I attended your evening last night and just wanted to say that you have an amazing talent”

“My god went to see Psychic Medium Nikki Kitt tonight my mum came through soooo happy she was spot on with everything.. Thank you Nikki amazing night” 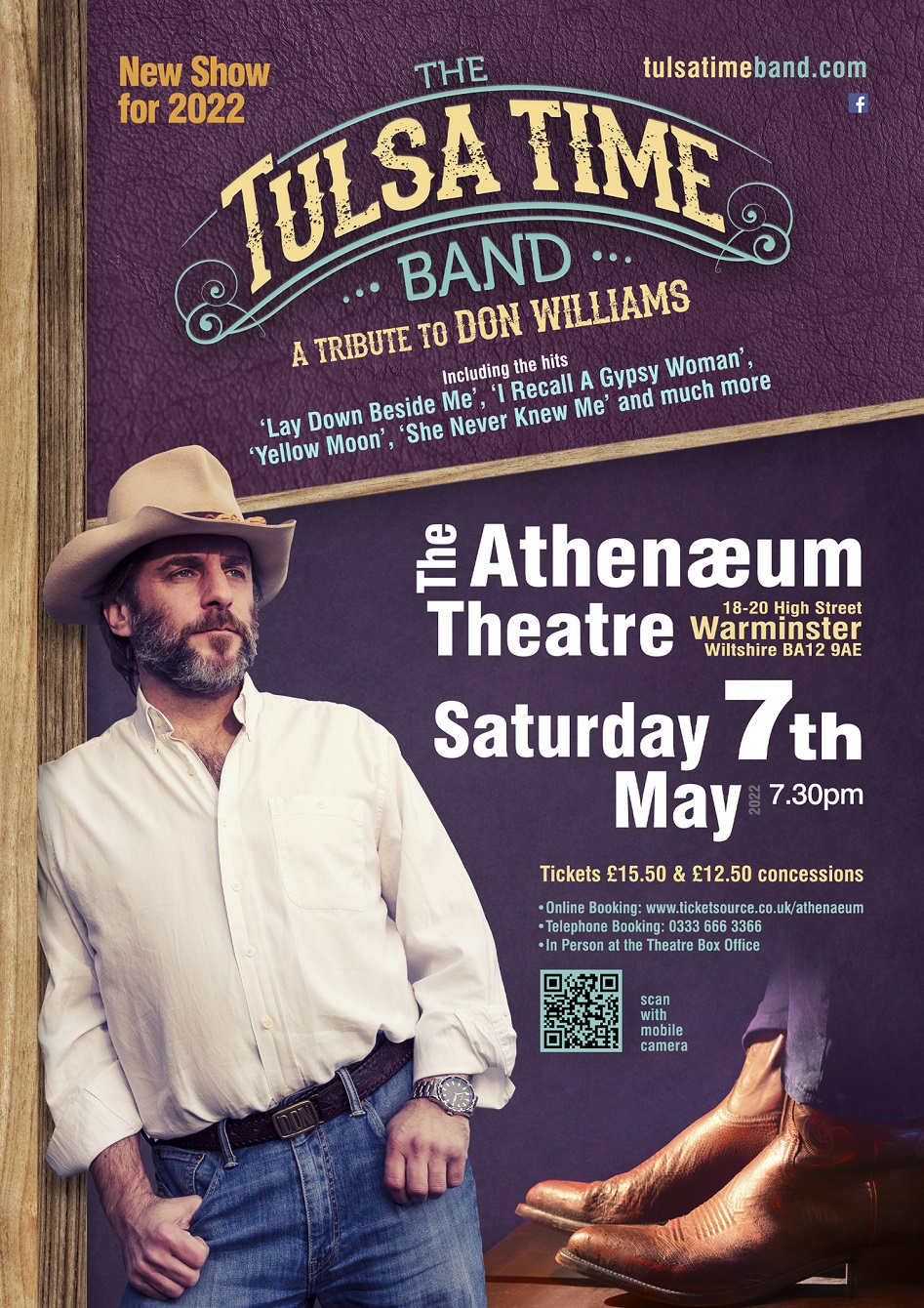 A Tribute To Don Williams

The Tulsa Time Band return with their tribute show to the great Don Williams. Performing numbers from Don’s wonderful catalogue of songs. Now in their fifth year the U.K’s only Don Williams Tribute band are guaranteed to have you singing along and tapping your feet.

* There will be no social distancing in the auditorium on the date, subject to current government regulations at the time of the event.
* Face coverings are no longer mandatory, and it will be at the discretion of patrons if they wish to wear their mask. 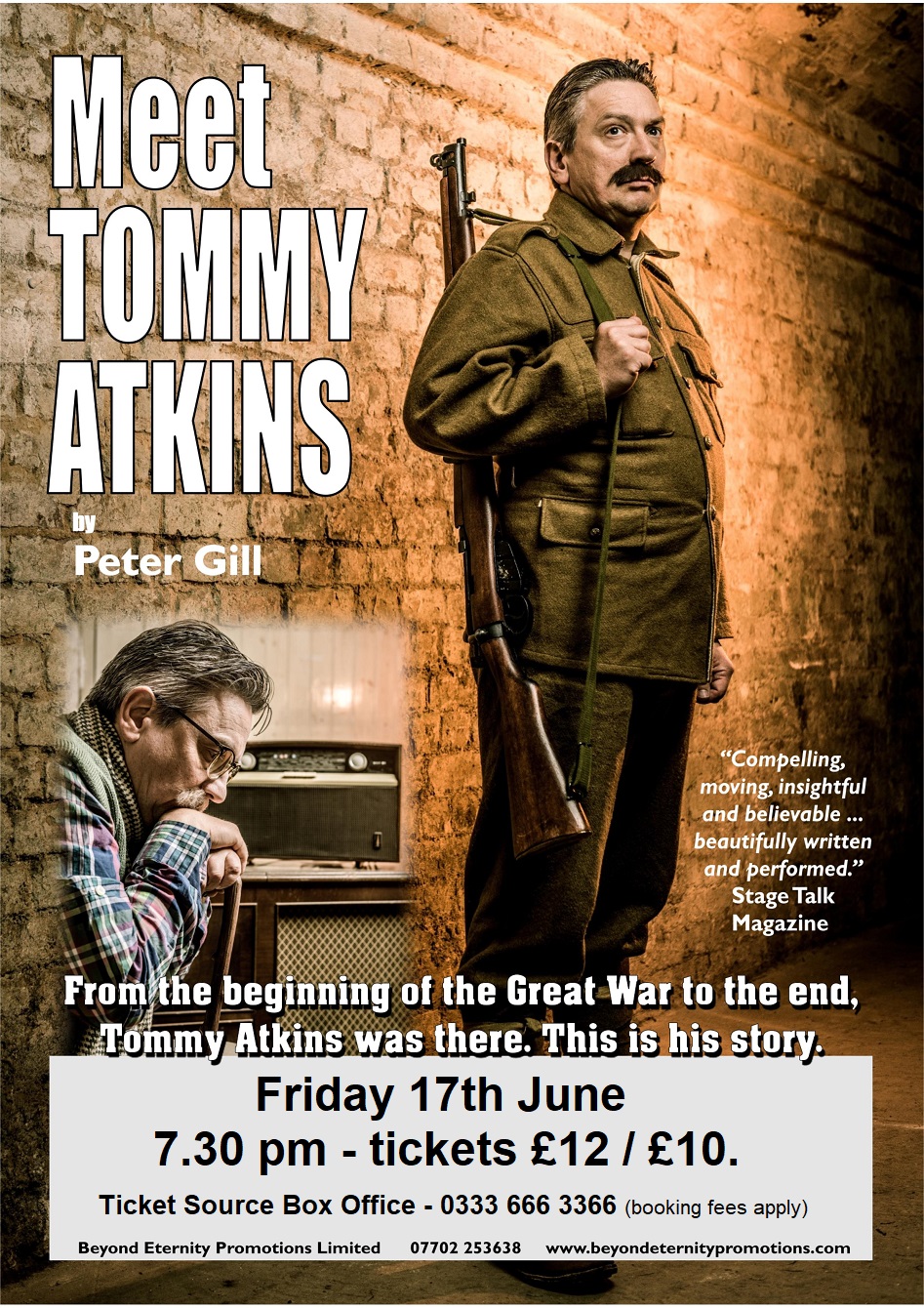 Presented by Beyond Eternity Promotions Ltd
‘Meet Tommy Atkins’ takes the audience not just through Tommy’s war, but also his life back home in Britain post war. We learn of his experiences in the trenches – fighting on the Somme, at Passchendaele and Loos; and also of the boredom, the loss and indeed the comradeship. Returning to Britain, Tommy shows us how a generation of returning men were maltreated but how ultimately it was his generation that forced through the foundations of the Welfare State.
From the beginning of the Great War to the end of the Second, Private Tommy Atkins was there.
This is his story.